For the first time in my life I feel deeply offended by the actions of our Government.

Sure, I have disagreed with all levels of our Government, at one time or another, but this is a first for me to actually feel offended.  Personally attacked.  My democratic rights and freedoms have been stripped away.  Taken not by an act of law, but an act of opinion.  I have been officially illegitimatized by my own Government, through misrepresentation, deceit and a slew of lies.  I am ashamed and embarrassed to be a Canadian, living in what I thought was a free and democratic society.

I spent over 30 years of my life serving my Country and my community as a soldier and a police officer.  Even during retirement, I continue to serve my community, at least I used to, until the Liberal Government enforced an Order-In-counsel banning the tools of my trade, my craft. 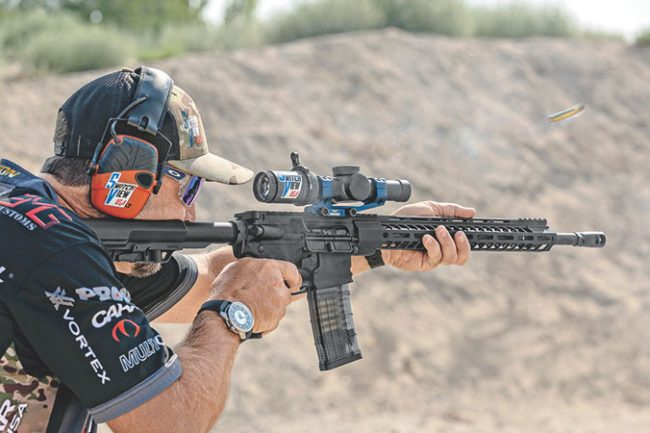 I am a hunter, a sport shooting competitor and a firearm training specialist.  Many of my skills and qualifications I earned courtesy of my Regiment and my Service.  I also dedicated much of my personal time, money and effort into perfecting my skills, through training and competitions.  Particularly with an AR15 sporting rifle.  I have competed with this rifle at local matches, as well as at the Provincial and National level.  I am baffled and shocked by the statements made by the Prime Minister and Minister of Justice Blair; both have said that the Government’s actions we will not affect sport shooters, target shooters.  Since when are firearm competitions not considered a sport in Canada?  Since when is punching holes in paper accurately on a range not considered target shooting?  I have been doing both with this rifle for the past 20 years safely, legally and proudly.

“I want to assure hunters and farmers and target shooters in this country that nothing that we are doing today or will do in the future is intended to interfere with this lawful, responsible and legal activity.”

I watched Minister Blair, when he was the Chief of the largest Municipal Police Service in Canada, participate in information sessions with the Association of Chief’s of Police, as well as with the media, pushing to get AR15’s onto the front lines of police services.  One major concern the Chief’s had was that the public would get a misconception that the AR15 was a Military Assault Weapon.  To correct this perception, they advised the Canadian Public not to worry, that the AR15 IS NOT a military assault rifle, it is in fact a Patrol Carbine Rifle.

Before this firearm ban came into effect, I was actively training law enforcement officers in the use of the AR15, aka their Patrol Carbine Rifle.  These soldiers and officers recognized the need to be as proficient, competent and confident with this rifle and seek out further training from specialists like myself.  Qualified sport shooters have also benefited from the rifle training I provide, learning to be safe and to perform the skills necessary for competition purposes.  Each of them, and there are very, very many, have dedicated their own time, money and efforts towards these honorable activities.  All of which has now been ignored and destroyed.

The time, money and effort I have devoted to my craft, is priceless and has now been obliterated.  I have dedicated a large portion of my professional and personal life to this training and sport and it all has been illegitimatized by this erroneous order in counsel.

I most certainly understand the Government’s intent to mitigate risk and protect lives, however the methods which they are utilizing to accomplish this are illogical, unfair, unjust and truly against my Rights as a Canadian Citizen.  And not to mention ineffective and a waste of tax payer’s money.

Since the early 1990’s both the Liberals and Progressive Conservative Governments have successfully impeded upon the rights of Canadian Citizens to own and use firearms.  All under the guise of public safety:

**For a comprehensive list of Canadian Gun control acts through the years, check out the RCMP’s timeline.**

These Bills enforced the re-classification, banning, confiscation and registration of firearms.  Although these Bills were implemented through somewhat proper democratic proceedings within the House of Commons, they came with a cost of well over 1 Billion Dollars, and ZERO results for improving the safety of the public from any and all acts of firearm violence!  And now, through Liberal opinion and a draconian act of a Minority Government, P.M. Justin Trudeau is continuing down this failing path and has stripped me even further of my rights to own property and blaming me as the criminal.

Here is what the former Ontario Provincial Police Commissioner Julian Fantino had to say while opposing further gun control measures being debated, stating in a press release in 2003:

“We have an ongoing gun crisis including firearms-related homicides lately in Toronto, and a law registering firearms has neither deterred these crimes nor helped us solve any of them. None of the guns we know to have been used were registered, although we believe that more than half of them were smuggled into Canada from the United States. The firearms registry is long on philosophy and short on practical results considering the money could be more effectively used for security against terrorism as well as a host of other public safety initiatives.”

To date, the Liberal Government has been advised by every firearm advocacy group that putting a ban on firearms will not curb or end firearm violence in our Canadian society.  The men and women in our firearm sport shooting communities are the most respectful, law abiding and safe shooters I have ever witnessed, worldwide.  The Government and media are big on statistics.  One just needs to examine them and see for themselves how true this is.  Especially if you examine the restricted semi-automatic sporting rifles category (as the Government states them as AR15).  Our Canadian communities are much safer from such firearms, then they are from all other acts of neglect or violence.  But the Government and the media turn a blind eye to this!

Why is my sport, recreational hobby and time-honored tradition any less legitimate, valuable or worthy than someone else’s, like hunting?  The vast majority of hunters in Canada do not hunt for the sustenance of their lives, they do so quite admirably as a sport, a hobby.  My tools are not for hunting, they’ve actually been regulated not to be used for hunting, but they have been regulated and supported for target shooting.  Which is what thousands of law-abiding target shooters do every day across the Country.

I keep hearing through the media, questions being posed by other Canadians to us sport shooters, such as;

‘Why would I want to have a military assault rifle’?

‘Why would you want to own something so dangerous that has killed so many innocent people’?

To me, these are logical questions, from the misinformed, they were deceived and lied to by our Federal Government Leaders.  First off, I don’t own any military assault rifles.  I own semi-automatic sporting rifles, exactly as they were designed.  And I have used them legitimately and safely according to law.  Nothing I own has ever killed someone in Canada.

I would like to propose a similar question back to the public;

“Why do you need alcohol”?  Do you know how many innocent lives are lost from people who drink!

“Why do you need to smoke cigarettes or marijuana?”  Do you know how many innocent lives are lost from people who smoke!

“Why do you need such a ridiculously fast sports car?”  Do you know how many innocent lives are lost from people who own these types of sport cars and drive at such excessive speeds!

You are allowed these things because the Government and the Public got together democratically, assessing and debating the issues and ultimately regulating each of these matters for their lawful enjoyment.  (Don’t get me started on the ‘economic’ side of this.  Money does drive and influence much of the decision-making processes).  But the point being, a fair and reasonable balance can be obtained through a democratic process, providing regulations for the legal ownership and use and with keeping citizens as safe as possible.  Something that we already had with our sporting rifles!

Just Trudeau Speaks with the Public about tougher gun laws

This Order in Counsel to ban the legitimate ownership and use of these sporting rifles was created and implemented by opinion and not by fact.  The Federal Liberal Government exercised no democratic measures within the House of Commons to further regulate this Order-In-counsel.  There is no balance here between my rights as a Canadian Citizen and any risk to public safety.  Surely, the results of all the Canadian Firearm Laws and Regulations enacted to date must show evidence that we, the Firearm Owners of Canada are not to blame.  But here is the TRUTH.  We are a minority, an easy target.  And the Government has set their sights on us, to make it appear that they are doing something.

Even if it costs millions of more dollars.  Even if it does nothing to lessen acts of firearm violence.

Even if it does infringe upon personal rights and freedoms.

Feeling offended is actually an understatement.